Where Is The Spirit Of Ginger Rogers? 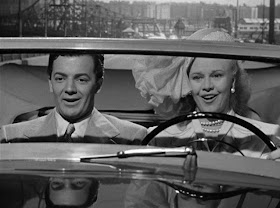 It's nothing but a little lamb steak with goo on it.
Oh i'm sorry Johnny, it isn't lamb - it's veal.
Don't tell me, I've been eating it for years.
Oh I ought to know, it's my favorite dish.
It's lamb
It's veal
Lamb
It's veal
I tell you it's..
It's.. for a buck..?
A buck
Okay.
I just watched 'It Had To Be You' starring Ginger Rogers and Cornel Wilde. I absolutely loved it. But I also felt a sadness, as I often do when I watch movies from this era.

Ginger Rogers really takes you on a ride in this film. She is full of boundless energy, a natural sparkle and comedic grace in a way rarely seen on screen. It was rare back then in the 40's, but even more so now. When I think of Jimmy Stewart, or Jack Lemmon; although we'll never replace them, we'll never get near them; occasionally we get someone like Tom Hanks who, on his better days, can carry the torch in some way. 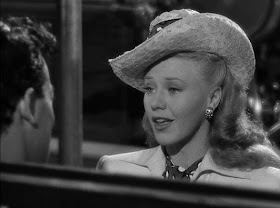 I must admit, I am partial to falling in love with the likes of Paulette Goddard, Jean Arthur, Ingrid Bergman; etc, but this isn't just that-- I'm not just crushing on another black and white movie star. I am concerned about the soul and spirit of Ginger Rogers; it's something we need, especially in the movies -- but I don't see it any more.

The innocence, the mischievousness, the joy, where is it? I think that's it, most of all, the JOY. Look at Ginger in 'It Had To Be You' - she is firing and bouncing and jumping and running and leaping her way all through the movie. It's beyond compelling, it's beyond having fun, it's beyond good acting. It's this intangible thing that you can't quite put your finger on. It's a magic that shined throughout her career; and tonight, I noticed it more than ever in 'It Had To Be You.' 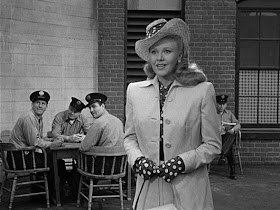 What I am getting at is that feeling you get when you watch Ginger Rogers on screen. You can't help but be swept away in the moment; you're right there in 1947 with her character; and it is one giant sea of pure joy. The problem with films these days is, perhaps, not that they don't make them like they used to, but that they're not even trying.

Where Is The Spirit Of Ginger Rogers?
at 13:02
Share