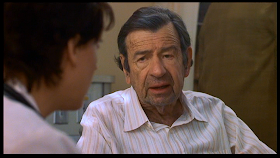 Angie, did l ever tell you about the time l got a gun from John Wayne?
No.
Pat and I wrote a picture for him called Luck Runs Out.
Oh.
Yeah, he was a very nice guy. They say that he had a very small pecker.... but that didn't keep him from being a real He-Man.
The trailer for 'Hanging Up' would have you believe that the film is a lightweight chick-flick; something for the girl's to sit around watching and laughing as Meg Ryan runs around comically whilst phoning her sisters. This is certainly an element of the movie, but it's only one element, and there is actually a lot more that the film has to offer.
I always think of 'Hanging Up' as a Nora Ephron film, but in fact; it was directed by Diane Keaton. Let's first begin by figuring out who did what:
Originally, it was a book, by Delia Ephron.
The screenplay is by Delia Ephron and Nora Ephron.
It's directed by Diane Keaton, who is also a star of the film.
It's produced by Nora Ephron.
And Executive Produced by Delia Ephron.
So who did what, exactly, and how? We'll never know. Anyway:
Eve (Meg Ryan) has to deal with her Father, Lou (Walter Matthau) who is in hospital, and dying. Her sister's Maddie (Lisa Kudrow) and Georgia (Diane Keaton) are too busy with their self-absorbed lives to deal with the fact their Father is coming to the end of his life. Everything is left to Eve to cope with. 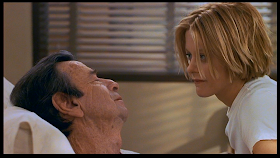 Despite Meg Ryan's character taking the brunt of the responsibility, Lou is always asking after his other daughters; painfully unaware of how they are not there for him. To make things even more complex, Eve's husband is constantly insisting that she should have nothing to do with her Dad because he is a selfish drunk who's caused her a lot of pain.
The film is sad, yet hopeful, complex, yet simple, funny, yet sad again -- in fact; it's very real. It's something that a lot of people will relate to. Meg Ryan shines in the film in one of her best performances-- mixing the adorable comedic style she has made her own, along with some subtle, moving moments.
But the real magic comes from Walter Matthau. This film was released in 2000, the year he died-- which made and makes this film even more poignant. Matthau is absolutely delightful in the film --- playing a role that is hilariously funny, as he obsesses constantly over "John Wayne's pecker;" but is also tinged with sadness as it's clear the character is losing his memory. There are also some very emotional and dramatic scenes that show how capable Matthau was as an actor. 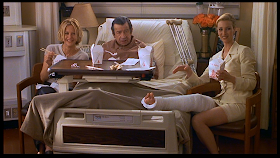 If you've ever had to take on a lot of responsibility when those around you won't take accountability for everything that's going on, then you'll relate to this film. Her sisters don't hear her, her Father keeps forgetting who she is, and her Mother doesn't want anything to do with the situation. This isn't a typical Meg Ryan film, and it isn't a typical Ephron film. It's something personal, a truthful roller-coaster about life, death, and siblings.
I strongly recommend it. There are not enough films like this.
at 15:30
Share