This morning I watched twenty minutes of HIGH FIDELITY. A few days back I watched about half of SOME LIKE IT HOT. Earlier in the week I watched six minutes of an episode of ONE FOOT IN THE GRAVE and I even watched all of IN SEARCH OF A MIDNIGHT KISS apart from the last fifteen minutes. I never plan to do this -- and of course, many of you will be like "Dude, I'm like-- oh my god, what the hell? You're meant to be a film dude but real film dudes watch all of each film dude what the hell dude, really, what the hell?" 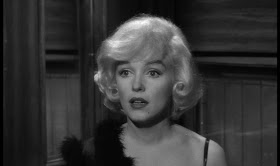 And of course, I agree. I never plan to not watch all of a film. I'm not really sure what happens, or why it happens. There are two factors that I can think of. One, my attention always drifts. Maybe I have Attention Deficit Disorder; but unfortunately it wasn't invented back when I was a kid, so I never had it. My mind drifts. Sometimes it's thinking about girls, "oooh, I wonder what Mandy Frumpton looks like naked." Sometimes, it's more creative thinking, like "oooh, I wonder if I creep down Brownhurst Avenue late at night, maybe I could sneakily see Mandy Frumpton naked." Sometimes my mind just drifts off and dreams of nonsensical things, like "ooh, I wonder if I asked Mandy out, and she said no, maybe I'd bump into her in the store, and she'd be buying beans, but they'd have no beans, and I'd steal some cheese. I'd steal the cheese and everyone would be running after me...." Then I snap back. I missed a bit of dialogue from the movie I'm watching. I get grumpy. Then I go for a pee. Then there's someone at the door. It's Mandy, she says to stop fantasising about her because she's trying to get some work done. Then I get a phone call. Then I come back to the movie but I quickly check my emails, and there's an email from a disgruntled blog reader saying "Your blogs are crap man! Don't you ever blog about important film stuff!?" and I say, "I do. Didn't you read the one about Mandy Frumpton?" and then I start the movie again-- but now I've lost it. Or rather, the film has lost it. Lost its flow. I decide to make a cup of tea then come back to it.

The problem that happens when I come back to it is part of the bigger problem. Namely that, my moods swing erratically when it comes to movie watching. I really have to be in the mood to watch a film. Often, when I stare at my DVD's, wondering what to watch; it's not so much about what is a good movie but 'what is it that I need?'. I need the drug of film, and I need the right prescription. For example, the other day; I was in a flighty, happy, Billy-Wilder-is-God mood, so I put in SOME LIKE IT HOT. But as it was playing, I got a great idea for a film. I paused the DVD and began frantically writing. Twenty minutes later I realized my idea; about two men who dress as women to make some money and avoid criminals was hardly original. I shut down my laptop and returned to the movie. But now I was angry at myself for starting a crap script, and this comedy nonsense was clearly not what I wanted to be watching.

This morning, I was in the mood for HIGH FIDELITY. I'd been avoiding it for about four years-- ever since I lent it to a girl called Gemma who decided to let her cat have a three hour disco on the data side of the disc (I can only assume). I decided to risk it, hoping the disc would work. It did, and the film was good. Just as I remembered, scenes in order and everything. But after a short break because of a work matter, I couldn't get back into the movie. I've seen it a heap of times, and it's slow and predictable and blah de blah, la la. I won't be going back to it any time soon. 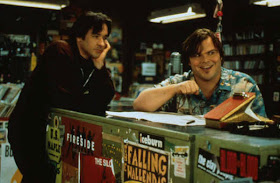 I have these scraps of movies everywhere. It can't be good for me to be watching random bits and pieces of films. Am I the only person who does this? I suspect you are all good film-people who would never ever even pause a film or even stop for fires, but maybe someone can relate.
at 16:14
Share