What is the cut off time? How long before a movie should you stop drinking? Or, what's the most you can drink? Of course, different people have different bladders (obviously. If bladders were communal, that would be bizarre). Some people can drink 50 litres and still say "no big deal, I'll pee tomorrow." But for many of us, we need to pee more. In fact, I think it's possible that people with perfectly good bladders find their bladders falling apart around the beginning of a movie. 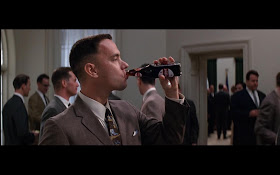 Why do they put the bathrooms so bloody far away from the screen you're in? What's that about? It's sexist, that's what it is. You come out of screen 14, and right there is a women's toilet. The men's? It's over there by screen 2. And by other there I mean down two flights of escalators. There's some kind of conspiracy going on here and I'm not best pleased about it.

The good thing about watching a lot of movies is that you know the exact point when they turn SHIT. When the girl turns to the guy and says "You either choose to come to your daughters school play, or choose to go to North Dakota for the business meeting." When that happens, you know what's coming next - so you can go and do some urinary depletion without losing the plot (of the movie). But then, once a year, they show a good film at the cinema. It's three hours long. You've just three teas and a double sized over sized super sized triple sized coke because it was 'only' £4 more expensive than the smaller one. So there you are, in the middle of the film; and the woman says "You can go to your daughters play, or you can save the Earth, or you can go back in time and save my Brother and change the course of history." Wow. You're hooked. You have to stay. But you need to pee! You look around. It's dark. The coke cup is empty. Do you dare? You don't. After all, the lady sitting two seats from you might complain. Or worse: enjoy it. 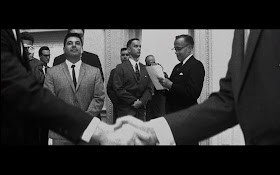 So what do you do? Why do they sell you a big drink and put the restrooms so far away? (I used the phrase restrooms for you Americans. And yes, your toilets are as terribly placed as English ones).

This problem can also end friendships. When you sneak back into the screen having had a much needed piss - you will inevitably ask your friend, "What did I miss?". The trusted friend responds, "nothing, she just got on that boat." Later on, you realize, she didn't just get on the boat. She got on the boat, shot three people, and released nine hostages. It's a pivotal point in the film, but your friend neglects to share this.

They need to put some headphones by the seats. You pick them up, put them on - and go pee. Still able to listen to the movie. Or, the weaker bladdered audience members should get a remote control. "Sorry everyone. I need to pee." That would work.
at 05:35
Share