Erupt With Enthusiasm And Drive.

I flick from Facebook to Gmail. I Retweet a Buddha quote and smile as I think about all the writing I'll do tomorrow. Just like I did yesterday. This isn't good enough.

"Well, what if there is no tomorrow? There wasn't one today."
-Phil Conners, in 'Groundhog Day'
Today. Now. Now is the time to erupt into action. Life is always in the way and life always has problems. There is no such thing as a perfect day or a peaceful day, there are just days. If you died NOW; think of how much time you've wasted in this last week. Dreaming of collecting all those Oscars, dreams of inspiring people --- stop dreaming and take action. Inspire yourself and do it right now.

You've been Reading positive books? Self-development books? That's cool. But sitting around in coffee houses having little moments of enlightenment with friends is not going to get you a career. You need to take those ideas and put them out into the world, the time for dormancy is over. You've been grounded for long enough.

The world is ready for your ideas. Ready for what you've got to offer. That's exactly why you're doing it. That meeting you're meant to have, that phone call you're avoiding, that script you're not getting through, that thing you're considering purchasing. Do it, now. Today. Act on it! Do it! We are not getting younger.

"So you're scared and you're thinking, that maybe we ain't that young anymore."
-Bruce Springsteen, 'Thunder Road'
"I'm not quite ready yet," you say. Maybe Barack should have waited longer before running for President. Maybe Michael Jackson should have waited until 2015 for a comeback. Maybe you did have a long day at work so you need a bit of a lay down and an episode of Lost. After you're done, maybe you can think about starting a project but instead have a bag of Doritos and look at cats running into walls on Youtube.

Maybe the idea isn't quite formed, maybe the confidence is hiding. So what should you do? Find it! Hunt it down! Ask for it! Search everywhere! It's bubbling up somewhere in you but it's only going to come out if you make it your sole purpose starting NOW!

It's tough, I know. You're worn out, I'm worn out. The world keeps changing your plans when you least expect it. The minute you are ready to take flight something keeps you on the ground. That person who let you down in 2007 is now working on something else, they're not letting you down anymore. That person that stole your idea/girlfriend/enthusiasm isn't doing it anymore, they've moved on to someone else. The only person holding you back is you.

There may be real problems but if you seriously want to make your amazing creative ambitions come true you need to overcome them starting now. Read an extra page tonight, get up twenty minutes early tomorrow, get that helpful podcast ready on your iPod, write them pages. If you struggle, write bad pages. Get things started.

Today will soon be tomorrow. Another opportunity gone. Step out into the world starting now. You have great spirit and imagination and talent and passion: but it's useless if you sit at home.

Get up. Change your life. Change my life. Change the world around you. One small volcano in a country no-one knows about has changed the world in one week-- changed how people travel, communicate and problem solve. Nature is our greatest teacher. Be a volcano-- explode into action right now--- your idea, your script, your performance, your dance, your voice: they're no good to anyone if they're locked in your room watching Scrubs re-runs. 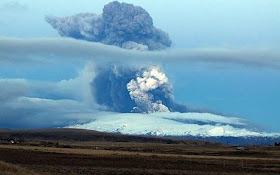