There's this weird thing that screenwriters have to go through - a battle between their natural instincts and pandering to what a studio/producer will want. And pretty soon, that wonderfully original idea about a piece of cabbage that invents a spaceship becomes... A standard rom-com about a 22 year old fashion designer. And the script never gets bought anyway, and the sad thing is that the idea about the cabbage never gets written.

I wonder, how much of this is based on the reality of the industry, and how much of it is based on this myth that's been built up? You feel it every time you watch an awful film - like at the end of 'Hancock' when Will Smith puts the heart thing on the moon, it just leaves you wanting to scream at how predictable and pathetic Hollywood can be. And you feel even worse about that idea you had, about the pensioner who who turns his bingo club into a terrorist training camp-- you tell yourself 'nobody will want this,' 'this won't sell.' and you're right.. But it's not because no-one likes the idea but because you never wrote the script.. Instead you wrote a film about an FBI man who tells the NYPD man "this isn't your jurisdiction." And the producer says "I don't like your FBI script, it has no imagination," and he's right.. Because instead of writing your passion piece, you anchored it to suit a bunch of producers and executives you've never met, who've never told you what they do and don't want. You're going on the basis of the big thing you just saw at the cinema where robots threw each other around, or based on what some script-reading-girl-turned-blogger told you to do.

For some people - this is fine. I've met many writers who just enjoy writing and then having meetings and going to lunch and redrafting. They're happy to do the FBI script with no imagination whilst they start a draft of a World War 2 screenplay even though World War 2 means nothing too them. And for these people, they can write happily like this and it's not soul destroying at all.

But the more artistic writers, who struggle and fight with themselves over one piece of work, they also battle with the worry of who will buy/produce/fund it - and it affects the work. 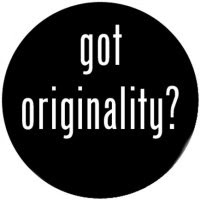 It's commonplace for writers and film lovers to bemoan the lack of original scripts. The writers often feel the industry is polarizing them and their ideas, but actually - us writers do it to ourselves. We end up conforming more and more to this idea in our head of what a commercial screenplay is meant to be.

There are legitimate reasons why we think like this -- but I just want to stand up for that artistic part of you (and me) that needs supporting. That part that says write what you want. Fuck, write it backwards, one word per page, if that's really what you want to do.

Film is only a hundred and twenty years old - no-one can say, definitively, what works and what doesn't--- and it's a long time since something truly unique and wonderful has come along - and I'm hoping it's going to be you who's reading this.