I decided at about 3pm today to go and see a movie. I walked for forty minutes to get to the cinema. The movie was 'Brothers.' A film about Brothers, in case that wasn't clear. I bought my ticket from the depressed girl at the counter. I was worried she was depressed because she was in the previous showing of 'Brothers' - but I didn't ask. 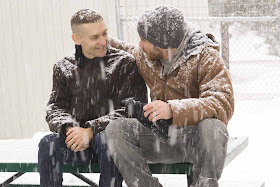 I went in and took my seat. Well I didn't take it, I mean - I just sat on it. If I had taken it, I would have needed some tools to remove it, and it's likely I would have missed the movie. I took it in the sense of, y'know, when they say, 'please take your seats.' They rarely mean steal them outright. Or maybe they do but every time they say it people just sit down and wait anxiously, therefore they feel compelled to put on a performance.
After twenty minutes of trailers, bad adverts, and Jamie and Louise pretending they fly with Thomas Cook (a reference for my 3 British followers) -- I was finally ready for the film. I was excited, very excited. The reason? I had the room all to myself. There is no better experience than having the cinema to yourself - the only things that come close for me are a) the first time I saw 'Double Indemnity' on the big screen, and b) The time I walked out of 'Gothika' after twenty minutes. By this point, I had fully accepted that I would have the screen to myself and I demonstrated this by sinking down into my seat and stretching myself out. It was actually very awkward and my knee bashed against the seat in front, but--- I was making a point, about freedom, so I took the pain. I mean, I didn't take the pain - I didn't put it in a bag and take it on holiday, I just mean--- I took it as in put up with it. The way you put up with your Aunt talking about the 1970's.
And then I heard a door slam and two people giggle. Or maybe two doors giggled and one person slammed. Either way, it dawned on me that I wouldn't be alone. This ruined EVERYTHING. I immediately felt aggrieved. I eyed them angrily as they came in. And UGHHH, they were a couple! They'll probably be fucking loudly in the back row. I showed further disdain as they passed me by....... sitting more upright. The subtext of this action was 'oh, you're here, I guess I have to sit up. I fucking hate you. Fuck you." They went and sat in the back row and didn't make another sound throughout the whole film but I still hated them because they ruined my experience.
And then, just before the film began - two little old ladies came in. And they sat in the row behind me. Almost directly behind me, except slightly to the left. And I could just feel them there. Their presence. UGH. I was meant to be on my own and now I had what felt like my Grandmother sitting behind me--- this is not what I wanted! To show my disdain, I immediately sat upright, knowing my reasonable tallness may obstruct their view of Natalie Portman as she is quite small and may only take up the bottom portion of the screen.

The film began. I fidgeted and moaned to myself inside my head and considered taking my seat and throwing it at the depressed girl who may or may not have seen 'Brothers' before. By this point, I had convinced myself the film was terrible because most films in this cinema are.
I just tell you this story in case you ever see me in the cinema. Some of you may think 'oh look, a nice, quiet, polite guy sitting there' or you may think 'He's crazy! Look at the turmoil in his head! I think this was meant to be an empty-cinema-experience-for-him!'
Anyways, 'Brothers' is a great film! Full of subtlety and truth - and real emotion-- it really got to me. The trailer kind of sucks, but the film is really --- meh, I'm not a reviewer. I'll just say, it was great. Portman, Gyllenhall and Spiderman were all great. Go and see it if you get the chance. I will also say, for the record, that the Danish version is better. Although, I've not seen the Danish version. But if I don't pretend I have and talk about its superiority then I will get attacked- much like the way I attacked the old ladies during the end credits.*
*I didn't really attack the old ladies. At least, not during the end credits.
at 13:34
Share