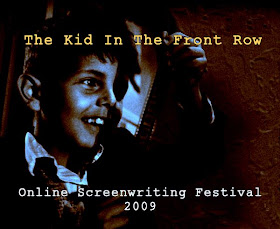 The Kid In The Front Row Screenwriting Festival 2009
BEST SCREENPLAY
Patrick O'Riley
'Hypo-Whatever'
Thank you to all who submitted. I was pleasantly surprised by the amount of entries - each script had original ideas and distinct voices of the writers. It fills me with joy to know there is talent out there capable of doing such exciting work under such strict conditions! You should all be very proud.
Patrick's script, 'Hypo-Whatever' showed some real imagination and originality - where the idea came from, I have no idea. With his permission, I'll be posting the screenplay very soon.
Also, when I get a chance - I will talk more about the other entrants and dish out a few awards - but right now, let's all congratulate Patrick on a well-paced, funny and dramatic script.
at 16:24
Share