Nothing to do with film at all, really - but his wisdom is something that has had a big effect on me. Rohn was an author, entrepeuneur and motivational speaker. What I liked about his wisdom is that it was usually quite simple -- but 100% true. He passed away on December 5th. I just wanted to give him a shout out here in the hope that some of you may go and watch his stuff on YouTube, or buy some of his books. 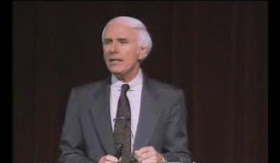