Polarity Of Pretentiousness - Talking With People In The Film Industry.

What's meant to happen is that the Filmy Person says "Have you seen [amazing old French movie] and you reply with "Um, ehhh, I'm not sure-- I think, maybe.." and then that person feels temporarily wonderful that they love more films than you, whereas you feel inadequate, pathetic, and useless. However, with me, I always forget to play the victim and instead the conversation is a bit bizarre.
FILMY PERSON
Have you seen 'Où Se Trouvent
Le Jambon Et La Yaourt?'

FILMY PERSON
Really? You must have! It's
directed By Jean-Luke La Mer.

KID
Is it the one with the Jamaicans
and the bobsleigh?

FILMY PERSON
Um, no - it's the one shot in
1934 in France, it stars Mary
Une Trousse. How can you not
have seen it?

KID
I've never been able to
see films before I've watched them.

FILMY PERSON
You call yourself a film director
but you haven't seen it?. TELL ME
you've seen 'Une Bouteille D'eau Du Pain?"

FILMY PERSON
Then how can you call yourself a
film director, when you're watching
films about Jamaicans who bobsleigh? 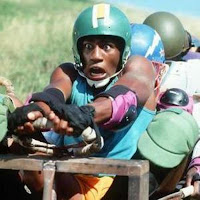 KID
Because I watched the film about
Jamaicans who bobsleigh and I still
managed to direct a film.

FILMY PERSON
Yeah but how can you call
yourself a director?

KID
Because I directed a film.

KID
You've never seen the one about
the Jamaicans and the bobsleigh.

FILMY PERSON
Why would I want to?

KID
I don't know, I thought we were
naming films we haven't seen.

KID
But I didn't direct that one.

KID
But I directed a film, in fact many films,
and I've never seen that film.

The Filmy Person begins shaking, and looking completely lost. He has no idea how to feel good about himself, he's only able to do it when putting others down.
It's like that famous quote, 'No one can make you feel inferior without your consent' - by Eleanor Roosevelt. It really takes two to tango with these conversations. Being CONFIDENT with the fact that you think GHOST or JERSEY GIRL are the greatest films ever is far more impressive and amazing to me than someone who oppresses others through judgement and pretentiousness. I have more to write on this topic, and will, tomorrow. But right now I need to go and watch WILD WILD WEST and SHE'S ALL THAT.
at 06:55
Share