I've had this Clint Eastwood blog floating around my brain since Sunday. I wrote a few paragraphs on blogger last night, and I wrote a few paragraphs on my iPhone today when heading towards Camden on the tube. Neither of them really do it any justice. I also wanted to write on the topic of the loneliness of being a creative, and how to gain support to curb that loneliness. I also wanted to write a really epic blog about my wishes to have a new attitude towards the gatekeepers who many upcoming writers/directors/moaners think are squashing their dreams, i.e. "They only want Megan Fox with her tits out, they don't want my little arthouse film about environmentalists which is filmed entirely in pitch black." I want to write about many of these things but also --- I really don't have the energy.

Part of this lack of energy is that I am very tired. Another part, perhaps, is that I haven't quite formulated my ideas for these blogs. So I figured, rather than wait it out; I would blog about not being ready to blog, and maybe I would touch upon some or none of those topics. And then I'd see where we end up.

Clint Eastwood is awesome, by the way. Did you know that? Like, he's really awesome. We really need to start appreciating that he is a truly, truly masterful film director. I'm not sure anyone else out there is currently as consistent as he is right now. He's making some beautiful, thought-provoking films. 'Mystic River,' 'Million Dollar Baby,' 'Changeling,' 'Gran Torino.' Incredible. Clint is awesome. 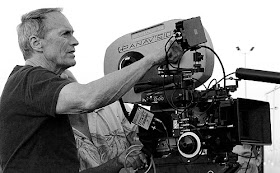 I think the most amazing thing about his films is how steady they are. They're just completely steady. I don't even know what I mean. Actually, I do know what I mean, I mean they're steady. If I didn't know I wouldn't have written that they're steady. I also wonder if the word steady has been used this many times in a paragraph before, but I am aware that if I keep wondering about this we will steadily fall off topic. Not that this post has any topic.

Please Buy/Rent/Steal a copy of 'Mystic River' and skip to 1hour 22minutes in. It's Sean Penn sitting on the steps of his house, as Tim Robbins is talking to him. Penn's daughter had died a few days back, or about an hour back -- depending on whether you follow DVD running time or actual-in-the-story-time, and Robbins says something to Penn about how his daughter looked really happy (just before she got killed) -- and Penn does this look, and then he does this thing with his lip--- and he looks away and stops himself from crying. This little moment, this little look, is probably the best acting I've ever seen. And it's just a moment. But it makes sense to me that it happened in a Clint Eastwood film.. because he really gives his actors the space to be themselves. To find themselves in a role. Despite the concise and steady nature of all of his films (especially in the last ten years) there's a real freedom to them; which allows the actors to find themselves in their characters. It's incredible. I learned something the other day that I didn't know -- that Clint doesn't say 'action' - he just mumbles something along the lines of, "whenever you're ready." I think that's brilliant, and something I am going to do on future shoots. How can you expect an actor to be natural and truthful in a scene about his dead daughter when someone yells 'Action!' 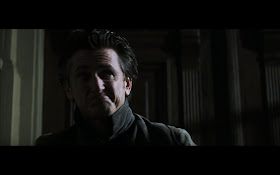 'Million Dollar Baby' is a great film. It's tone, it's style, it's rhythm, the way the relationships build between the three main characters, played by Clint, Morgan Freeman and Hilary Swank arereally amazing to see. I'm sure the script was great, but the genius is in the direction and the acting. So much is said with looks, or without looks, with words, and without words. It's all in the space between the characters. I have a feeling that Clint could take a script about a guy deciding which paint brush to buy, and he'd be able to make it incredibly profound.

I just realized that by giving myself permission to talk about anything other than my chosen topics, it freed me to write a load about Clint, after all. Thereby is lesson #1 today regarding creativity --- don't let your mind get in the way. Free yourself, give yourself permission to do other stuff, and maybe it'll come after-all.

I was slightly tempted to edit this post and make it a nice, clean, Clint-a-thon, but I kind of like how it's unfolded in this random way.

I went to a Richard Curtis masterclass the other day at the Royal Haymarket theatre the other day. He had some great advice for writers, and for actors. And I've forgotten it all. But let me try to remember................ Actually, I'm popping downstairs for dinner. Meanwhile, hopefully my brain will remember some Richard Curtisisms.

---- Am now back from dinner. Although, I find it hard for you to appreciate the time that has passed. Maybe I should press enter a few more times to suggest that time has passed.


Does that work? Anyways, the loneliness of creativity. Here's what happens, Julie says to you "you're going to be an amazing writer some day!" or Billy says "you have talent, you're going to be the best actor ever!" This belief/support/insane pressure is very good, on the one hand, because people believe in you. But of course, the writing of that script, or the constant auditioning, or the ploughing through months of pre-production paper work is a rather solitary journey. If you write a giant, complex novel, and nobody gives a shit, Only you fail. But Julie and her chubby pink cheeks didn't fail. They just sit there and say "aww, don't worry. You'll still be an amazing writer when you learn to put the full stops in the right place and everything." And you realize, you're lonely.

"Don't forget me when you get an Oscar!" Don't you just love that one. Normally somebody says it after helping you out, maybe by moving a camera bag across the room, or by helping you locate a clapper board that you misplaced in your apartment. So what happens is that you go and Direct your films for twenty three more years; and then when you finally get that well-deserved Oscar, the dude who found your clapper board wants a thank you for their support. That's lonely. That's a lonely twenty three years.

I'm writing this in a sarcastic way, I admit. In truth, that kind of support from people is important, and in many ways helpful. But you also find yourself marginalized, pushed into this position; the lonely position of being the one who has to deliver the goods. It's like when someone has cancer. Everyone rallies around and says "We're in this together," -- but only one person jumps on the operating table.

There's a real loneliness to the journey of fulfilling your creative dreams. Whereas Chubby Cheeked Julie who smells of banana for some strange reason is surrounded by a hundred people who think you're going to be a great writer.

I touched upon something in my last post, about recognizing your milestones, and I think it's a really key thing. You become your own support system. Whatever your achievements, be they short film awards, a large cheque or completing three sentences before dinner, celebrate them, appreciate them. You did well. You did it yourself. Give yourself a pat on the back. We don't do that nearly enough. There is nothing wrong with appreciating what you've achieved, in fact; it's integral to what we do. I have a tendency to finish a project and go straight onto the next one. But to truly learn from our past efforts, we need to see the good in what we've done, not just the negative stuff as pointed by some obese dude with cheese around his mouth who says "there was a cup behind the girls head, then when it cut back it was gone, which is really dumb, you're really dumb, your film stinks, what are you doing." We spend too much time listening to that guy. That guy's not nearly as important as that guy inside you who says "WOW! You're alive, you cleaned the whole kitchen today, picked the kids up from school, and wrote four pages! wow!"

And in the words of the great Forest Gump, "that's all I have to say about that."