Errant Thoughts From A Week Of Movie Watching.

'The Proposal' is a film you see with your girlfriend. If you're girlfriend's not available, you download it illegally. If you can't find it online, you wait for DVD. And preferably, you wait for a girl to watch it with. Or you do what the Kid In The Front Row did, and go see it on the big screen, alone. I was surrounded by either twentysomething couples, or thirteen year old girls. Either way, I was completely out of place.

But, as usual-- once a film starts, I couldn't care less. And surprisingly, I kind of enjoyed 'The Proposal'. It's got a lot of crap from people for being formulaic, predictable, etc etc-- and they're probably right, but I was able to forgive it -- I just enjoyed drifting into the light fluff and being swept away in beautiful wide shots of Alaska, and the simple, fun comedic happenings on screen. It was a perfect way to begin my week of movie watching. A much different experience to...

'Trouble The Water' is a documentary showing a very personal account of Hurricane Katrina, filmed by an amateur filmmaker on her little camera, as it was happening. Seeing the effects of the Hurricane and what the people of New Orleans went through is uncomfortable, yet riveting viewing. And of course, like the Spike Lee documentary 'When The Levees Broke' (which I feel is a far superior film), the main thing that comes across is the complete ineptitude of the Governmental response. I'm not a particularly political guy, and it's rare you'll see me ranting about stuff on here. But in a country like America; the way the people, mostly black, of the poorest areas of New Orleans were treated is unacceptable. America can get aid to all areas of the world in no time at all, America can send armed forces anywhere in the world in no time at all -- and perhaps the most important thing, America can build incredible, amazing buildings and structures anywhere in the world in no time at all. But they couldn't get help to the people of New Orleans, they couldn't get them food; they couldn't provide New Orleans with an adequate Levee system. In a country like America, it just seems unacceptable to me to leave your own countrymen in that kind of predicament. The worst part is that I wasn't aware of the scale of neglect until a few filmmakers told me about it. It makes you wonder about the media. 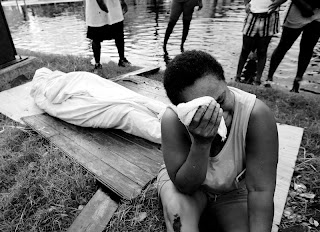 But yeah, go watch 'When The Levees Broke' and 'Trouble The Water.'

Watching the original 'The Blues Brothers' in the cinema is a great experience. It reminds you of everything that is incredible about the movies. 'The Blues Brothers' feels like it's been written by a hyperactive fourteen year old. You can imagine him writing the script "um, I know! And then a lady shoots them outside a hotel. And then a thousand police chase them into a building! And then all the police cars crash! and then they sing an old song! yeahhhh!" The strange thing is that it actually works. It's funny, it's entertaining, it's action-packed, it's heart-warming. It's everything. What a wonderful, wonderful film. Magic. And even more so when viewed on the big screen, as I was lucky enough to do last week.
'Duplicity' with Julia Robert and Clive Owen looked pretty interesting. After twenty minutes, I gave up.
'Revolutionary Road' is a film I'd been meaning to watch for a long time, but I had kept putting it off due to my belief that all Kate Winslet films look really boring. I eventually rented it. And I kinda enjoyed it. But I enjoyed it in a way where I was easily distracted and more than happy to go stop and start, finding time for mini Facebook intervals, raiding the fridge intervals, daydreaming intervals.
The film was a little pretentious, at times. I guess that was kind of the idea, I mean-- Kate and Leo's characters both think they're better than everyone and destined for great things, despite getting caught up in the mess of life like everyone else. Come the end, I felt I was right in my assumption about Winslet films. Because despite being watchable and occasionally intriguing-- 'Revolutionary Road,' for the most part, was quite boring.
Did I watch as many films as I'd planned this week? No. But I watched quite a few. And I did manage to write 51 pages of a feature script, so all in all, it was a good week, film-wise and other-wise.
at 10:12
Share