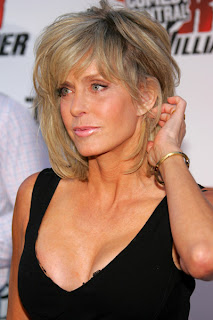 She was never quite on my radar. It's weird how some actors, even actors you like; are just not people who's films and TV shows you seem to watch very often. That's very much how Farrah was for me. And it's a bit odd that now, as her career and life come to a close; I remember her most for a guest role she did in 'Ally McBeal.' - but then, she was great in it.

Of course, she was extremely beautiful too - and that is one of the main reasons she'll be remembered. There's not many people who'll do a nude shoot for Playboy, aged 48 - and fewer still who'll be able to have sold as many copies as hers did (it was the best-selling copy of Playboy in the 1990's).

I don't have a lot more to say - I don't want to rehash biographic details about her, no doubt you'll be reading those everywhere else -- I just wanted to use this space to pay my respects to an actress who I should know a lot more about.
at 10:18
Share