'The Glory Of The Long Train Journey' 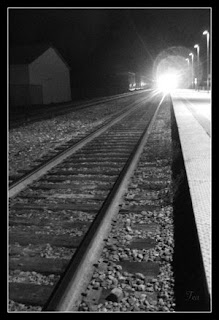 The great thing about sitting on a train for hours is that you get to make the soundtrack for it. Your mp3 player is packed full of your favourite records; you've got those dodgily recorded Dylan bootlegs, those rare Oasis demos that aren't rare anymore because no music is rare since the internet. Except that beautiful recording you've got of your friend Tina singing 'Tiny Dancer', it's the most beautiful song in the world and only you have it. And you ripped the YouTube video of that bald guy covering Eminem. You have everything you need. Between the towns passing by in your window and the tunes dancing into your ears - you have everything you need to convince you that life is wonderful.
You start off with 'Miami' by Counting Crows because it is exactly about one journey ending and one beginning. Then you listen to Springsteen who you're pretty sure got into making music just so that he could give you this moment right now as the night busts open and you feel these tracks. Could. Take. You. Anywhere.

We all like to make mix tapes and CDs for people but the problem is A) it's your ego wanting to prove it has great taste and b) the person you made the mix for never *quite* gets it.

But right now this playlist is just for you. You can dance to disco without moving an eyelid, you can sing along to Hanson without embarassing yourself.. Nobody is in this moment but you. And that amazing girl/boy is sitting opposite you but you don't even notice them because you're in the crowd at Woodstock singing Neil Young's words back at him.

By the end of the train ride you realize your problems are just problems - but none of them hurt you as much as Joni Mitchell breaking your heart, or Ryan Adams fixing it, or Aretha Franklin making you focus on your soul instead.

The journey ends. You've arrived, location: everywhere. You have arrived at life.
at 04:13
Share