Palisades Park on a Sunday Morning in July

What is the definition of a movie? What is a music video? In fact, what is a song? For years we've been force fed art in a particular way. A movie in a bloated two and a half hours in an over-expensive cinema, and a song in a committee-written, scientifically-proven concoction ready-made for the charts.

But the internet has blown things wide open. Nobody even knows how to distribute and promote anymore. And sure, you can push a track on me through advertising, but it just doesn't get through to me in the same way.

I found this new video by accident, only five days after the band published it.


Here's what happened. Neil Young had just played a gig in London. I turned down a ticket to do something else instead, but checked the setlists to see what I'd missed. Then I looked at some of his other tour dates, just to see what he'd played. Then I took a look at what Pearl Jam had been up to during their recent concerts.

And then I checked in on my favourite band, Counting Crows. They're touring and they're playing all these tracks I'd never heard of. So naturally I wanted to hear them. The new album comes out in September but I just can't WAIT!

And this might just be the most beautiful movie I've seen in some time. Or music video. Whatever you call it. I don't know. I don't really care. It's a story, that's what matters. 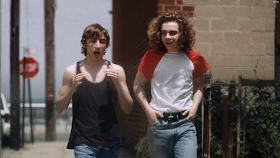 But just listen to that opening trumpet - it makes you dream. And then you see the guys sprinting through the streets, running from police and having the time of their lives and it reminds you of every great thing you ever did.

I'm always attracted to nostalgia. What is it about amusement parks that connects to your soul somehow? Something about rollercoasters and rides that I just connect with. This video has shades of Adventureland, which makes me love it even more.

Bill Fishman wrote and directed the video. how much input did the band have? I've no idea. Fascinating though. The song tells its own story, Adam Duritz's songwriting and voice are both always so evocative. And the sounds of the band are so deep and layered it's unlike virtually anyone in music, as creative and heartbreaking as the E Street Band.

Does the video tell the same story as the song, or is it just an interpretation? Who knows. Will the video mean the same to you as it does to me? Probably not, because I don't even know what it means to me. 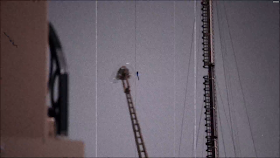 It's easy to bemoan the changing of films and distribution, or to bitch about the death of great music. But real art is out there. Like Richard Linklater secretly making a movie over 12 years about a boy growing up -- who saw that one coming? Counting Crows and Bill Fishman have delivered a piece of art which, at the time of writing has close to 300,000 views. That's nothing in the modern day of mad viral hits - but for a piece of non-attention grabbing, thoughtful-art, it's a hit to me and it'll be a hit for you. Put ten minutes aside and enjoy a beautiful song-film-musicvideo-thing.