Cinema Is About Hearing From ALL The Voices: The Lack Of Diversity in Hollywood

If you look at the current top 10 films in the USA Box Office, they are primarily written by white American men, aged between 30-50. Out of curiosity, I looked at the stats for the same time last year, and it was exactly the same. Most movies are written by white 35 year old guys who live in LA. Even, 'The Help', a movie primarily about black people, was written and directed by a white fortysomething male.

And I'm not meaning to start a discussion about institutional racism within the film industry. It's a much debated topic, and I don't know enough about it. I am here as an artist and as a viewer; saying: I'm pretty bored of what's coming out of Hollywood. Would more diversity, writer-wise and director-wise, not make films more interesting?

Last night, I watched a wonderful South Korean film called "Spring, Summer, Autumn, Winter.. and Spring". It's a film from 2003, about Buddhism, and the journey of a young man learning from a master. It was beautifully shot, thoroughly engaging, and completely different from what I normally watch, and indeed, totally different to my own experience of life. It reminded me of why I love cinema. At it's best, the movies can take us to places we've never been before. It can take us on unexpected journeys in unique ways. 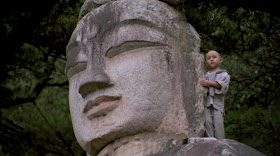 But just because I enjoyed it, that doesn't mean everyone who watches Ben Stiller movies would enjoy it as well. World Cinema is enjoyed by the passionate few rather than the mainstream. That's fine, but I feel there's definitely room for some cross-over.

Most films are produced in LA. And I don't mean to claim any of those over-caffeinated 30 something white guys are undeserving of their writing credits. Indeed, they are a demographic that I am a part of -- and for their perseverance and writing skills, they deserve all of the writing gigs they've been a part of.

But everyone else deserves those opportunities too, . and we're not seeing enough from them. Do black people struggle to understand Final Draft? Are women too busy sitting at home watching the new 'Dallas' episodes? Or does Hollywood, --purposefully or not-- favour the stories of one particular demographic over others? I ask this, not as some activist for equal opportunities, but as a film fan who thinks the movies would be better if more people were invited to the party.

If Hollywood were to re-make 'Spring, Summer, Autumn, Winter... and Spring", it would almost certainly be written by a 36 year old white guy.

Here's the pitch meeting. In Starbucks.

JIM STEIN
So like, my idea, like, for this movie -- is that
we have these Buddhists, and we see their
inspiring journey.

BILL
But we want it to be authentic.

JIM STEIN
Yeah man. Like, I am so into Buddhism right now.
I read 'The Secret' and I am going on a four day
retreat next month.

JIM STEIN
It is cool dude. We should make the movie.

And then the movie gets made.

Of all the world's wisdom and intrigue; should all of our stories be coming from a select group of American dudes in LA? Isn't there more to life than that? When you think about the power of cinema - it seems strange that so much of what we see comes from a very specific demographic. It's a demographic that grew up on movies. The modern LA writer can talk to you endlessly about their inspirations and influences --- the end result? Most movies are about other movies. It's hardly a surprise that most movies coming out of Hollywood are remakes and reboots; when that's all anybody has experience in --- other movies.

I think this is why I am spending most of my time watching foreign films right now. They're far more engaging and thoughtful. When I look at the history of cinema; so many of my favourite writers and directors came from more humble beginnings. Ernst Lubitsch, Billy Wilder, Frank Capra, Charlie Chaplin -- all emigrated to the USA; and the pain and complexity of their lives was woven into their work. Chaplin escaping poverty, Wilder escaping Nazi Germany. And THAT is what made their work so beautiful, the stories behind the stories. The sweet and the sour. 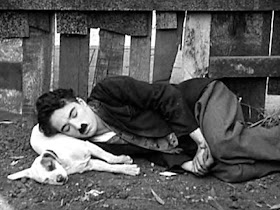 Now we have privileged white dudes. Film school brats and Starbucks. And they're responsible for everything we see in the cinema.

Within diversity is a plethora of stories. I feel we have milked nearly every drop out of the thirtysomething-white-American experience. What else can we learn about what it is to be a human being? Could movies play a larger part in showing us? Is Hollywood even remotely interested in the world outside of Starbucks?
at 05:44
Share