And I always think Ricky Gervais is magnificent, but I forget every time. There's a huge anti-Gervais bandwagon that is so strong and dominant that you can't help but be influenced by it, your mind gets turned.

But then you look at the work, and you get blown away. 'The Office' was a masterpiece. 'Extras' was great fun, and 'Cemetery Junction' was subtle and wonderful.

The problem with 'The Office' was that it was TOO successful. Filmmakers couldn't have any scenes set in offices for the next ten years, because everyone would say "You're ripping off that Gervais show!". What I love about "Derek", is that it's kind of similar to "The Office". You can feel it's the same writer/director (not forgetting he co-created 'The Office' with Stephen Merchant).

When Gervais ridicules people at awards shows and can't shut his mouth in the media -- you think that's all he is; this outspoken egotistical comedian.

But he has a bit of genius about him. And most of that reputation is media nonsense.

"Derek" is beautiful. His character is fascinating, complex, hilarious, and more than a bit sad. I don't have a clue who Kerry Godliman is, but she absolutely broke my heart in this pilot. So subtle, so honest, so real. And the scenes with the 'gay' guy were incredibly heartfelt and romantic. Reminded me so much of Tim & Dawn in 'The Office', especially those scenes at the Christmas Party, you remember those? So REAL. Ricky Gervais has a way of filling your heart up full; yet we always seem to doubt him, why? 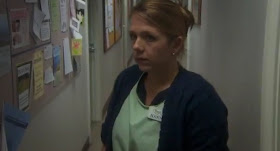 They're saying this show could end his career? They could be right, but only because he may have trouble topping it. It's 'The Office' but with ten more years experience. And they say it takes ten years to become an expert. But he was already one when he made his first show. Now, he's approaching mastery.

Not everyone was sold by the first episode of 'Derek', but that's fine! Ricky Gervais is like Woody Allen and Larry David; a hilarious guy who is after expertise, after doing things from the heart. What matters to him is that he NAILS it. He'll always have an audience. And not because he's a celebrity, but because he's an artist. I'm in it for the long haul, wherever he goes. I'm looking forward to seeing where 'Derek' takes us.
at 11:42
Share