The Apartment - A Perfect Screenplay, Dialogue-Wise, Structure-Wise, And Other-Wise

For one week I will be focusing on the film "The Apartment." This is the second in a series of articles. 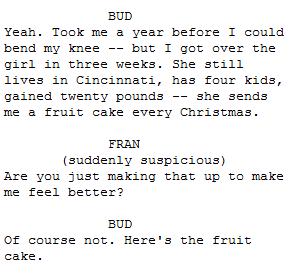 'The Apartment' is an easy screenplay to read. It's effortless and breezy; and impossible to put down. 'Effortless and breezy' might make it sound like a simple, and unimportant screenplay; but as fellow screenwriters will agree; we'd love for our screenplays to feel like this. If we look a little closer, underneath the snappy dialogue and memorable characters, we can see how two screenwriting masters, Billy Wilder and I.A.L Diamond, shaped and crafted one of the greatest scripts of all time. I want to apologise, in advance, if I refer to things as 'Wilderesque' or 'a Billy Wilder line..' because I am aware that he co-wrote this with Izzy Diamond, a wonderful writer in his own right. It's impossible to see or know what came from who. Even Billy Wilder would admit he didn't have a clue who penned famous lines like "Nobody's perfect," (the last line in 'Some Like It Hot'.)

There are many rules to writing comedy, but my main rule is: look at what Wilder did. Read it, learn it, practise it, read it again, watch the films, and do them all again fifty times. You're going to get more from this screenplay than from an expensive course. One of the things we see again and again is how something would get planted, in the script, and it would be seemingly meaningless-- but two pages, or sixty pages later, it would provide a laugh. Here's an example.
This is a very early exchange between the main character, C.C. Baxter (Jack Lemmon), and one of the executives who is using his apartment for rendezvous with women. Baxter is referred to as 'Bud' in the script. 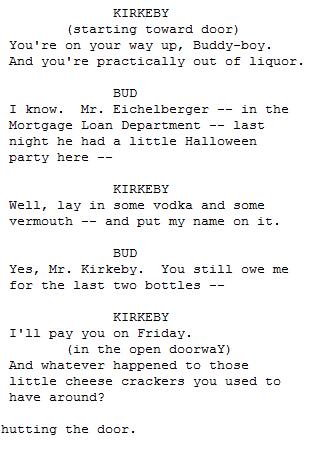 First let me mention something else. There's a great line there; "You're on your way up, Buddy-boy. And you're practically out of liquor." This is the delightful way Wilder uses language; to point in one direction but then pull you somewhere else. It's delivered as if saying "You're on your way up, and things are going well for you," or something equally mundane, but it's pulled another way, to give more meaning, and humor. This has always been part of Billy Wilder's repertoire. He used a similar device in 'Double Indemnity' when Jackson says "Mr. Keyes, I'm a Medford man - Medford, Oregon. Up in Medford, we take our time making up our minds," and Mr Keyes responds with, "Well, we're not in Medford, we're in a hurry."
But back to the screenplay sample. There's a line by Kirkeby about cheese crackers. He's just asking where they are. It's mildly amusing, because we, as an audience, see how put out Baxter is. Not only is he being muscled out of his own apartment by his superiors, but they're demanding cheese crackers. It's funny. But it's funnier a few pages later, when Baxter is desperately trying to talk Dobisch out of bringing a girl to the apartment. 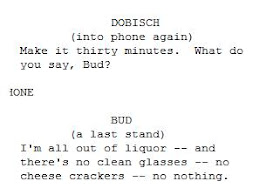 The cheese crackers come back, in a throwaway line. The reader of the script, or audience of the film, don't even remember that they remember cheese crackers, but the joke is funnier because of the previous information. I don't mean to imply this is the greatest joke ever--- but the screenplay is peppered with many of these. In screenplays today, jokes are often obvious, and instant. Or-- if they do plant information, they make sure you know the joke. If the cheese crackers line was written in Hollywood today, they'd probably build it up sixteen times, just to make sure you get it. "Oh, I must remember to get some cheese crackers. Yes, cheese crackers would be good." That's the magic of Wilder and Diamond, they lived by the rule of 2 x 2. They give you the math; but they let you find the answer. They don't need to tell you it's 4, it's more fun if you find it out yourself.

One of Wilder's greatest skills, and most used techniques, was to have the characters to say something that meant more than one thing. Most of the time, it would mean one thing to the character it was being said to, but it's meaning was entirely different to C.C. Baxter, and to us, as the audience. 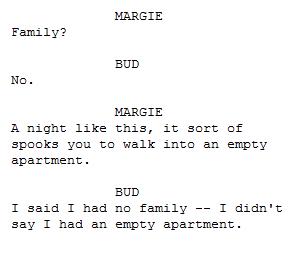 These jokes are peppered throughout the script. You often don't notice them and you often don't realise you found them funny-- but they add layers to the experience.

The joke here, again, is about how everyone is using his apartment. Margie has no idea what he's talking about. Billy Wilder cast Jack Lemmon again and again, and only settled on making 'The Apartment' after finding Lemmon and working with him on 'Some Like It Hot.' He found, what he called, his 'everyman.' It takes someone like Jack Lemmon to make these lines work. He doesn't go for the joke, he doesn't add anything to what he's saying--- he just says it. The comedy comes from the banality of the lines. Good comedic writing fails, more often than not, when a director or an actor tries for too much. This can be better explained by a line from the TV show "Studio 60 On The Sunset Strip."
Harriet: I got a laugh at the table read when I asked for the butter in the dinner sketch. I didn’t get it at the dress. What did I do wrong?
Matt: You asked for the laugh.
Harriet: What did I do at the table read?
Matt: You asked for the butter. 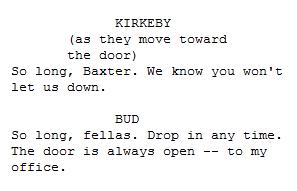 To just talk about humor and jokes is to do a huge disservice to the screenplay. The way Wilder and Diamond planted information was used for more than just one-liners about cheese crackers. Like I said at the beginning -- reading the script, like watching the film, is a breeze, but that's only because of how expertly the material was written and handled. The final act of the film, and how it all comes together; is probably the best screenwriting I have ever read.

One of the key moments in the film is when Fran Kubelik overdoses on sleeping pills. We know she's having a tough time, and we know she is suicidal. Baxter is still concerned about her mental health; refusing to open a window in-case she jumps, and he comes home one night convinced she has tried something again when he smells gas. 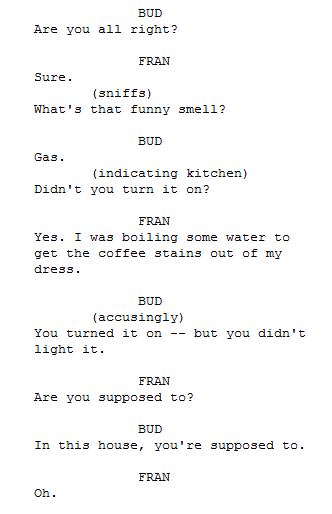 But then we have an unexpected twist, a moment which brings the characters closer together. He shares the story of how he tried to kill himself once, but, in a moment of panic - shot himself in the knee. 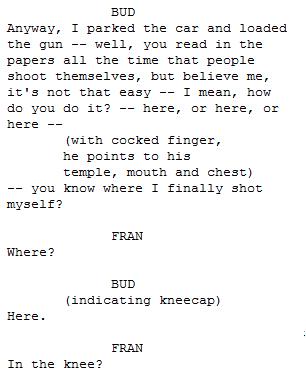 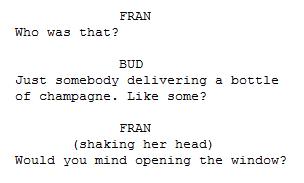 There's a bottle of champagne. It's mentioned again later on--

The champagne is just champagne, it doesn't mean anything to us, the audience.

There are many things to say about the ending. But I don't want to spoil absolutely everything for those of you who haven't seen it. Suffice to say; the way in which Fran realizes she wants to be with Baxter is quite wonderful, and the way in which she comes to that realization, with Mr. Sheldrake (Fred MacMurray) is magic in itself.

The film ends with her running as fast as she can to Baxter's house. It's exciting; we're ready for our happy ending. Here's what happens: 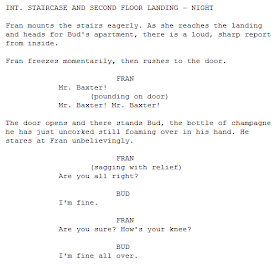 When Fran ran up the staircase and heard a bang -- she thought he'd shot himself. We, too, feared the same. The scene is a repeat of the earlier one where Baxter comes home to find the gas has been left on, only this time, it's the other way around and there's the unmistakable bang of a gun.

We don't even realize we knew about the champagne, it was so insignificant.

But when we see Bud with the champagne, it all makes sense; we're all relieved as Fran is. It wasn't a gunshot, he was popping champagne. And we even get a 'Wilder' line --- "how is your knee?"

There are about a million things that make this my all time favorite screenplay. The things mentioned in this post are just scratching the surface. I really hope you read it. It's magic, and magic is a rare thing, screenplay-wise, film-wise, and other-wise.