I've always admired Tom Hanks and his career choices. Until 'The Da Vinci Code', when it seemed like he was jumping on the latest-craze bandwagon. But then again, he's earned the right to do so - having satisfied his fans again and again and again and again and again making great movies, giving perfect performances. So by all means, he should get the golden paycheck. But then he did the sequel. And again, why not, I guess. But Tom Hanks is my favorite actor of the modern era - and I long to see him doing more subtle and fascinating characters.. (I can't wait for 'LARRY BROWNE'!). Anyways--

Here's something difficult to watch. It's Tom Hanks giving a keynote speech for SONY in 2009, and it's rather painful to watch. Whilst I, as a fan, have felt a bit uncomfortable seeing my acting hero doing the giant-budget-bore films recently, I think there's an element of that feeling in him too. 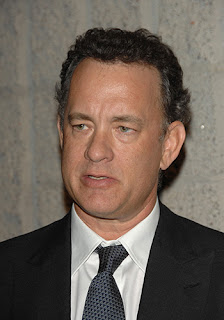 He had to give this keynote speech as part of his contract for Angels & Demons. As the speech progresses, he gets more and more awkward with the material he's made to read from the prompter; and when the big Sony boss comes on stage, their joking with each other does have some 'ouch' moments - and there's genuine tension between them. Hanks jokes that he's not getting his Angels & Demons paycheck until the speech is done - yet, funnily enough, there is truth to that.

Here's Tom Hanks, doing his corporate duty; yet remarkably, by some miracle, maintaining his integrity and remaining my complete All-American hero. Fascinating, funny, and painful. This video demonstrates the remarkable tension that exists between the business side and the creative side of the industry. Even Tom Hanks isn't immune.