I am on a plane, flying from Krakow to London. I have no particular reason to blog, but then, I figured it'd be good to blog for no reason like a thirty five year old housewife in Minnesota blogging about her conversation with a man in a clothes store. You know the kind. Or maybe the real reason I'm blogging is to avoid an article I'm meant to be writing for a magazine. Planes are not the time to be doing real work, especially when listening to Augustana, and talking you. 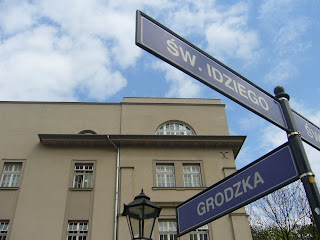 Krakow is a fascinating place. On the one hand, it's a sweet old town full of picturesque buildings and lovely people. On the other hand, it's still dealing with it's complex history. I was in Krakow for five days. I visited Auschwitz and saw the terrifying scale the Nazi's went to towards exterminating the Jewish race. I visited Nowa Huta in East Krakow, a town built by the communist government surrounding the steel mill there. Communism in Poland ended in 1989, and now-- much of the town is out of work and poor. The older folk long for things how they were, the younger people turn to crime. Everything about Nowa Huta is grey and depressing. The oppression of Communism is still present in strange ways. I was also privileged to be on this journey through Polish Communism with a guy from Belgium, who spends four months a year in Cuba. He had a lot of amazing insight into the situation there which was really eye opening!

We saw a field which was advertised by the Communist government as a holiday place with a beautiful lake with space to put up tents. The lake was a piece of propaganda magic; there was no lake. Many citizens around Poland believed there was, and even travelled there for holidays. 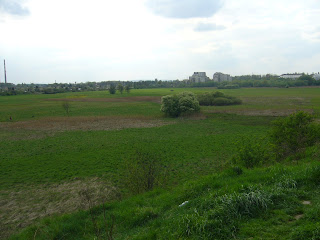 It's funny how people so often say, "don't worry, it's in the past." It's normally said by people with privileges, people who are not the oppressed. You might hear "Stop going on about the Holocaust, it's in the past, what has it got to do with me?" We've all come across attitudes like this. If Poland teaches you anything, it's that history is always present with us and there is a lot to learn from it.

My time is Poland came only weeks after President Lech Kaczynski was killed whilst en-route to Russia to commemorate the Katyn tragedy. I arrived after his funeral but there were many other services taking place for people who were on the plane. The pride and passion the Poles have for their nation is incredible to see. A nation invaded and oppressed by the Nazi's, followed by half a century of communistic rule... It's incredible how strong a sense of individuality you get being there. Poland is Poland, you can't mistake it for anything else. 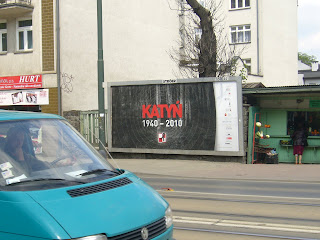 There are still things to be answered about Katyn. Bodies to be found, acts to be accounted for and compensation sought, more than 70 years later. The disaster on the 10th of April with President Lech Kaczynski may have been a one off accident, But it feels like just another in a long line of Traumas to hit this wonderful nation. His body now lies in Wawel castle, Krakow.

I'm listening to Van Morrison and Sinead O'Connor sing 'Have I Told You Lately' I just realized; in the process of avoiding writing an article about Krakow, I've written extensively about the topic here.

I have decided to drastically alter my sleep patterns. I don't sleep well, I have no pattern--- but it's getting to the point where I realize, life isn't about lying in until 11am on a Tuesday. I am going to get up early, consistently-- and I think it will force me into having earlier nights and in the process my days will be more productive by taking control of my sleep rather than my sleep controlling me, or pulling the random crap that it often does.

Here's a short story I started but got bored of. I do this a lot. I could publish a book of single paragraph things written for no reason, for nobody to read. So here's the most recent:

The girl buried herself under a sea of tasks and problems as a way of convincing herself that life had meaning. She always wanted to believe the friendships in her life were special and that her part in others lives was profound. It was the only way she could distract herself from the fact that deep down, she knew only too well. The fact was: she was ordinary. Completely ordinary. Pains in her feet, an ache in her heart and a frown on her face; she was just like everyone else - and all she could do was reject this knowledge.

The UK elections are pissing me off. They're all bad mouthing each other and launching fresh new promises each day. It's all so ridiculous and all we can do is go along for the ride and vote for whomever seems the least fake come the end. I'm still planning to vote for Jed Bartlet.

Okay, time to stop writing. And here's one more picture from Krakow. 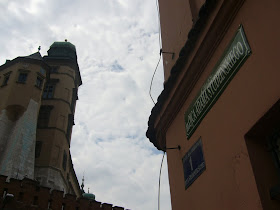