I'm going to slow down posting here for the next couple of months. Rather than the usual smattering of film related articles - I am going to focus on the eight writer/director's who have influenced me the most, and write about each of them one by one.

My aim is to look closer -- why are they so great? Why does their work resonate with me so profoundly? My hope is that I'll learn a lot more about their works but also -- I'll learn a lot more about me. I'm setting a deadline - 5th June 2010, that's two months from today. Before those two months are out I will have gone back and re-discovered the back catalogues of those eight writer/director's, and have written about each of them. 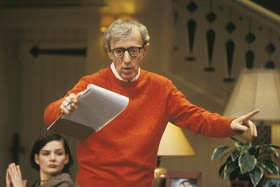 The films I gravitate towards tend to be those directed by the person who wrote them. It's not an absolute rule; and originally it was always by coincidence -- but I remember many years ago looking at my favorite films and realizing they were, more often than not, by writer/director's. And then of course, it eventually began to dawn on me that it wasn't coincidence at all: I love films that have a singular voice shining through them; when one person has an idea, a vision, and is able to express it in a personal and meaningful way. Occasionally, you get a writer like Charlie Kaufmann who manages to have this influence by being a screenwriter alone - but, by and large, it's the writer/director's who are able to do something more personal, and more profound. So I want to look closer at that. Precisely, I want to look closer at the ones I love - and explore the reasons why.
at 16:32
Share