I arrived in Leicester Square with the intention of meeting a friend for a drink, but was distracted by the gathering crowds who had descended on the square to, I assume, watch a bunch of reasonably famous people walk into a cinema. 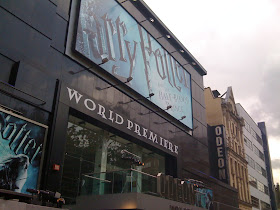 I was intrigued by the phenomenon in a way that I haven't been before. Exactly what is it that makes thousands of people think "I know, today I am going to stand in Leicester Square in the pouring rain, so that I can watch Daniel Radcliffe get ushered in on the red carpet under an umbrella."
Whatever the reason, only these people would know. 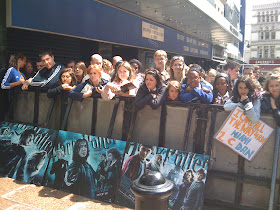 I wonder if the girl on the right with the homemade cardboard banner saying "I came all the way 4rm Miami 2 C Dan" made the banner in Miami before travelling, or after arriving in London. I also wonder how smudged the words got after the torrential rain, which I witnessed from the comfort of Yates bar, before I strolled over to the Prince Charles Cinema to watch 'Double Indemnity.' 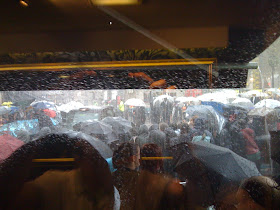 People get their kicks in strange ways. Suffice to say these girls and slightly-too-old balding men managed to still scream wildly, despite the heavy rain. Or maybe they were screaming because of the rain. I don't know.
at 14:13
Share